The annihilation of the Amazon rainforest is accelerating rapidly and is transforming the region from an alive and thriving forest to a near-dead savanna. 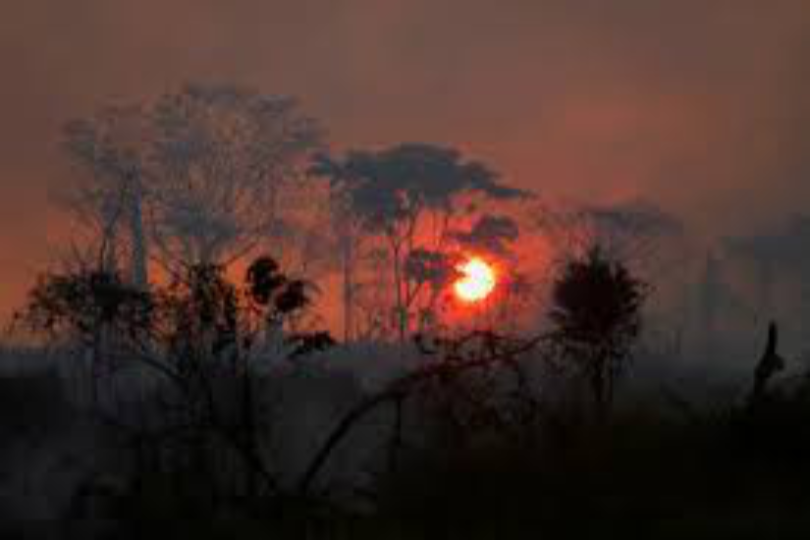 The Amazon rainforest has had so many trees removed in recent years that it is now in a state of rapid decline. Cattle ranches, large agricultural plantations, logging interests, and the mining industry are all contributing ro its demise. Photo: Robert Meya, via Twitter

According to a report filed on May 6 by the Instituto Nacional de Pesquisas Espaciais (INPE), the National Space Agency of Brazil, deforestation of the Amazon rainforest for the month of April ripped out almost twice as much forest as happened a year ago.

Using satellite and on-the-ground reports, INPE calculated that a total of 390 square miles (1012.5 square kilometers) of rainforest had been burned, chopped down, and bulldozed from April 1-29, 2022.

This represents a 74 percent increase over last year’s April destruction of 224 square miles (581 square kilometers) in the same region. That itself was up by 43 percent from April 2020’s numbers.

It is astounding both in the size of what was cleared out and because this is the rainy season for the area. That is typically a difficult period for mass clearing by any means. Burning of the forest, one of the easiest methods, is of course challenging until the forest dries and in between rainstorms. Chopping down trees is also difficult because of muddy conditions. But somehow the damage was done.

After also hitting new records for deforestation for the months of January and February, Brazil also set a record of destroying 754 square miles (1,954 square kilometers) for the first four months of the year. That is up 69 percent from the January-April 2020 period. That is equivalent to about double the area covered by the city of New York.

Activist groups were quick to identify the primary culprit behind what has happened this year.

“The cause of this record has a first and last name: Jair Messias Bolsonaro,” said Brazilian advocacy group Climate Observatory Marcio Astrini.

Ever since right-wing President Jair Bolsonaro was elected in 2019, reckless deforestation with virtually no concern about the damage caused has been a hallmark of his administration. Bolsonaro’s cronies in big agriculture, mining, and logging were invited into the rainforest from the moment he took office. They burned down much of the forest, cut down other areas, and pushed through with heavy equipment to tear out when the other two approaches would not work.

They also did so despite that many of the lands and waterways defiled and destroyed by the government and its political partners are in fact already occupied and owned by multiple Indigenous tribes.

Almost all the destruction was carried out illegally, in violation of multiple local and national regulations. Bolsonaro simply looked the other way, and openly defied those who claimed he had no right to destroy the Amazon rainforest, one of the most important natural resources on the planet.

“You have to understand that the Amazon is Brazil’s, not yours,” Bolsonaro said about the deforestation during an interview in July 2019.

He said further that the satellite data that INPE was reporting on about the increased deforestation since he took office was “lies”, despite that the INPE is in fact a branch of his own government.

Bolsonaro praised the rainforest clearing as being carried out as “fulfilling a mission from God”.

The people whose will he fulfilled by allowing this represent the wealthiest and most corrupt of business groups in the country. Big agriculture, with some of the biggest soy farmlands in the world and extensive cattle farming, is constantly in demand of new land to increase their production capacity. Mining interests are continuing to clear land and blow up mountain areas, to gain access to more gold in the area. In the process they do more than just wipe out the forests and the living creatures which live within them; they also leave toxic mining tailings which pollute the waterways of the Amazon and nearby tributaries. Logging interests destroy vast preserves of trees which could otherwise serve as carbon sinks for greenhouse gas emissions, while destroying habitats as well.

Even without the current acceleration of deforestation in the Amazon valley, the rainforest was already projected to be on a prolonged death march. In a study conducted during the summer of 2019 by a team headed up by the University of Florida, researchers conducted a careful analysis of the changes such deforestation was causing and how fast the damage was spreading. Experts cited the importance of the interlocked canopy of trees of the forest which traps both heat and moisture, providing rain to fall within the Amazon even when skies above were clear. Estimates showed the Amazon all on its own recycles, where the forest is still present, between 25 percent to 50 percent of all rainfall which has made it through from above during rainier days.

“The best way to think of the forest ecosystem is that it’s a pump,” study lead author Walker said in a recent interview about his team’s work at the time. “The forest recycles moisture, which supports regional rainfall. If you continue to destroy the forest, the rainfall amount drops… and eventually, you wreck the pump.”

Layered on top of this in the study was an analysis of how rainfall and humidity were changing as a direct consequence of the global climate crisis. Even without the cutting down of forests, much of the region has been devastated by what amounts to a severe drought compared to previous conditions.

The conclusion of this group was that, under current pressures and the continuing stress of global heating, the Amazon rainforest would cease to exist as a functioning ecosystem by 2064.

In another study released in 2021, an international team of researchers concluded that so much damage had happened to this rainforest to date that it was no longer a net carbon dioxide absorber, and was instead a net carbon emitter. While that does not change the value of the rainforest which does exist as a carbon sink, it shows how profoundly the damage to the rainforest has changed its role in protecting the planet.

With this being an election year in Brazil, sadly the damage to this rainforest will likely continue until the next president is chosen. Government officials who are already corrupt relative to the rainforest destruction typically do even less to enforce any local laws about it during an election season. That’s the conclusion of Ane Alencar, science director of the Environmental Research Institute; she notes that this has happened historically even before Bolsonaro was in power and is even worse now.

Even with that, Alencar called the rise in destruction rates this year “absurd”, and now “institutionalized in the country” as the new normal.

At this rate of deforestation, the transformation of the Amazon rainforest into a thinned-out, dry, and lifeless savanna may happen far faster than the previous estimate of just 42 years from now.

The destruction of the Amazon won't just impact Brazil. It will massively impact the entire planet because the Amazon is an essential part of the Earth's climate and life support systems and one of our planet's most important bio-diversity preserves. It was home to hundreds of thousands of species, many of which exist nowhere else. Countless species have already been wiped out and become extinct because of the destruction. Countless because no one is really counting and because there were so many species that hadn't even been identified before being wiped off the planet.

In killing the Amazon, we are killing ourselves and humanity's future because the destruction of the Amazon greatly contributes to runaway catastrophic climate change.

is not just the fault of Bolsanaro. He is just a caricature of the greed, criminality, selfishness and stupidity of Brazilians, and all humanity.

For those who don't want to be mindless parasites bent on the destruction of life and the undoing of billions of years of evolution, simply switch to a healthy plant-based diet. Go a step further and buy locally grown produce and then go even further and start growing your own food.

Most people of course won't change their diet to save themselves or their children, and the Amazon won't be saved. Earth will become increasingly inhospitable, there will be mass famine and deaths from extreme temperatures and increasingly severe storms. Our civilization will collapse and most life will perish. Earth will likely bounce back without us, but only after tens of thousands or possibly millions of years. It will never be the same.

The humans who survive will be those who wake up, see what is happening, consciously evolve and learn to live in climate-proof, self-sufficient and sustainable habitats. The first such habitat starts construction this year and is being designed and built by Climate Survival Solutions.