"Every Step You Take" Generates Electrical Power for Startup

Sometimes the most brilliant ideas to save the planet lay right beneath our feet. At least that’s the way it is working out for the founder of a clever alternative energy enterprise. 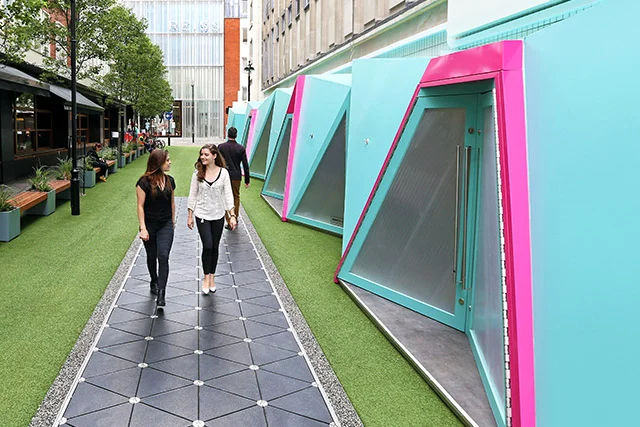 Pavegen's Oxford Street test installation generated electrical power as pedestrians walked along, and provided an interactive experience with what was alongside as well. Photo: Pavegen

The idea was simple and brilliant. Try to find something which happens every day on a mass scale and could be used to generate electricity, but is effectively just being thrown away. Then find a way to capture it.

That is how Laurence Kemball-Cook, the founder of and CEO of Pavegen, came up with the core idea for his new enterprise.

His inspiration came when he was searching for a way to provide electrical power for city streetlights by harnessing solar and wind power. There was a problem with either idea. The city streets he was hoping to illuminate were heavily shaded even during the peak of day, so using solar energy would not work. The buildings were also clustered close together so there was not much wind each other.

Then he looked down at his feet and found his breakthrough idea.

As a resident of the United Kingdom at the time, Kemball-Cook started thinking about the estimated 75 million visitors who passed through the UK’s famous Victoria Station every single day. He realized just the act of their walking across the floors in and around that station represented a unique source of energy that no one had attempted to harness before, at least not on a mass scale.

Kemball-Cook wondered if there was an economical way to convert the shift in weight and pressure on the ground as people walked into electrical power and store it. Then it could be used to power anything.

What Kemball-Cook and the team he eventually put together invented was a unique kind of paving material which was resistant to heavy use and extreme weather, and yet would collect an estimated 7 watts of electrical power for every step taken on one of his paving “stones”.

It took over 750 prototype generations to perfect what they need, his company in 2009 was able to set up a first real-world experiment. The founder took the risk of installing the pavement on a building site without permission, mostly because unless the first test was one that would provide hard proof of his innovation’s capability, it would not convince enough people to try it out.

It took time and multiple funding raises, including a £2.5 million (US $3.2 million) crowdfunding raise in 2018.

Now, 13 years after that first “small step for his company” in 2009, Pavegen’s tiles have been deployed on city sidewalks, in airports, shopping centers, train stations, and more, in 38 countries. Installations have also expanded into tests in smart cities, retail shops, and educational institutions in Hong Kong, India, South Korea, Thailand, the UAE, the United Kingdom, and the United States. Major deployments are expected soon.

The company also estimates they have saved the electricity generated by half a billion footsteps on all those tiles.

Pavegen has also created pads designed for dance floors and gaming installation, and installed them for early tests in Munich, Germany. Those prototypes alone have reportedly generated enough electricity to allow an EV car to drive as much as 700 miles.

It is innovations like this – simple and based on a genius insight --- which could “pave the way” to a brighter future that goes well beyond just powering the city lights at night.