The United Nations’ Intergovernmental Panel on Climate Change issued the final volume of their latest report yesterday. It sounds a more urgent alarm than ever but continues to promote the gross fraud that there is still time to avert catastrophe by merely reducing greenhouse gas emissions. 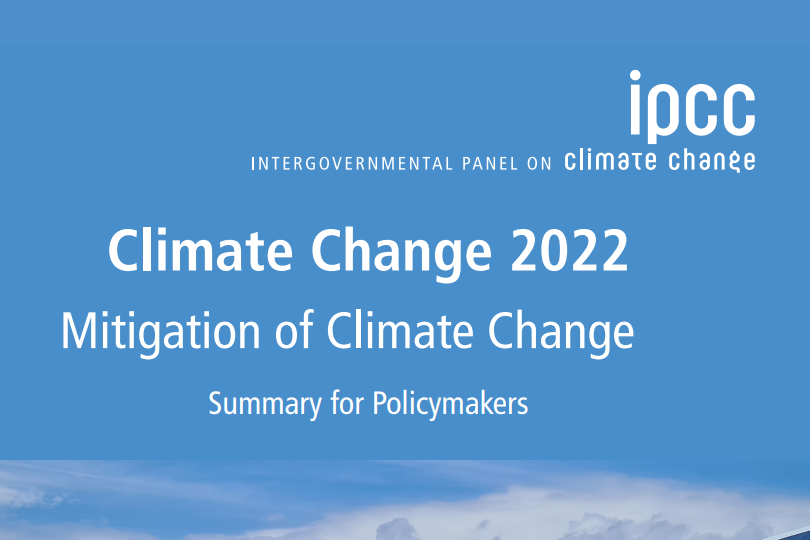 The previous two past volumes of the latest magnum opus from the corrupt and inept IPCC, published in August 2021 and February 2022, presented hundreds of pages of carefully filtered data from international climate experts declaring three main points.

The first was that no matter what the denial community continues to claim, the climate crisis is real and is transforming every aspect of our lives at this very moment.

The second was that the crisis is entirely our fault. We, the human race, did this to ourselves.

The third was that the pace of global heating continues to accelerate. If we continue our present course of burning fossil fuels and live as before without drastic changes, even to survive, we and nearly every species currently on the planet are doomed. A mass extinction event of cataclysmic proportions will happen.

Volume 1 of this report laid out the causes of the crisis. Volume 2 described the implications of the crisis in terms of drought, extreme weather, sea level rise, and mass extinctions as ecosystems were unable to evolve fast enough to survive.

Volume 3, the part which just came out, describes potential courses of action to address the crisis.

This report, more than the other two, has let us and the planet down once again.

The failures of the text begin with once again embracing the idiotic fiction that we have the option of “limiting global warming to 1.5° C”. As has been demonstrated just as a matter of record, much of the planet is already several degrees C warmer than that, with entire regions even where human beings currently live nearly uninhabitable, when they were not just a few decades ago.

The 1.5° C fraud unfortunately shapes every aspect of this report.

In this volume, the IPCC declares that this is a state of emergency requiring immediate action by all nations on the planet, not just in the 195 member nations of the IPCC who helped prepare this report.

It begins by summarizing key “recent developments and current trends”, starting with that, “Global net anthropogenic [human-caused] emissions have continued to rise across all major groups of greenhouse gases,” from 1990-2019. 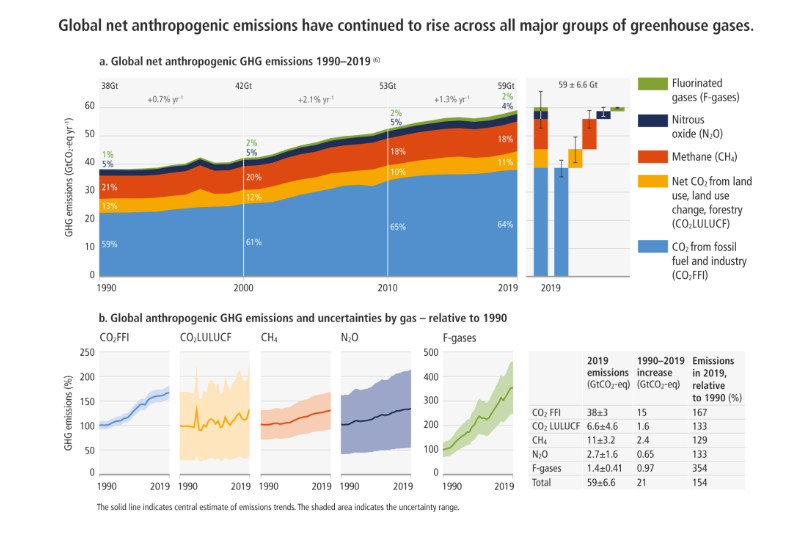 It points out that those emissions have continued to churn upwards even while the costs of lower-emissions alternatives for energy generation, such as from wind and solar, have dropped substantially in the last ten years. Lack of perception of the crisis as sufficiently serious, insufficient political will, and, especially in the case of less developed economies, not enough money set aside to make the shift.

It sidesteps discussing any serious strategies for adaptation to what has happened. It does so principally because the IPCC continues to maintain both that the temperature changes have been relatively minor so far, and that the direction of climate change is reversible.

It notes for the first time somewhat realistically that carbon mitigation strategies as caring for existing forests and planting more (as carbon sinks) will fail, since it would simply not be possible to grow enough trees to make any real difference in carbon sequestration even in the long term.

It does pay attention to carbon capture and storage (CCS) technology as a means of drawing in the carbon dioxide already present in the atmosphere, but calls it out as expensive, unproven even on a small scale, and with an impossibly long time until it could, even if it worked, pull out enough carbon to do anything to save us.

With that as the frame for this volume’s conclusions, the IPCC recommended the following actions:

Force greenhouse gas emissions to reach their peak by 2025, far earlier than any major government has agreed to. Its plan for accomplishing this includes that all use of coal must be halted nearly immediately, methane emissions must be cut by one-third from all sources (including livestock production and agriculture), and investments in renewable energy alternatives must increase by six times their current rates. Hydrogen power was pushed far more than in past years as an important part of the new mix of electrical power generation.

Change how we live and the way the economy, transportation, agriculture, and shipping function. It is to be done all with an eye to reducing our real carbon footprint, not one based on carbon credits and carbon swaps. Of all the strategies incorporated within this report, this is the one that represents the most radical shift in perspective of the IPCC compared with the past.

Though not described in detail, the report does find major problems with what might seem positive transitions for the planet, such as the digitization of entertainment. The explosive growth of data centers and their high power consumption is just one aspect of why these are making some things worse rather than better.

Also not described in detail is what one could refer to as the “Amazon-ization” of commerce, where buying locally continues to decline as a priority. We buy from all over the world and somehow believe the emissions footprint of the path of those goods to our companies or homes is someone else’s problem.

The report also touches on how what we eat and how agriculture functions is also contributing to increased carbon emissions. That too requires a radical change to cut emissions, starting at the very least with the elimination of meat, poultry, and other livestock, to cut methane releases.

What the report is missing is any real sense of how the world is going to deal with the reality that human beings will not keep greenhouse gas emissions from increasing by 2025, just three years from now, and that we will continue to hang on to our old ways of living in a carbon-intense hothouse of a planet.

It is just too easy to continue business as usual, arguing that the costs of extreme drought, destruction of agricultural production related to that, forced migration due to sea level rise, growing destruction by more powerful tornados, hurricanes, and super-cyclones, and mass extinction events connected with global heating are just items to pay rather than to face up front.

Even now, as the western powers boycott purchases of all Russian oil and gas, the response of most nations has been to demand more drilling for fossil fuels rather than increased investment in renewable energy.

At least UN Secretary-General  António Guterres had the courage to say some previously unspeakable things, as this volume of the report was published. He called out a number of governments for claiming they were taking strong actions to address climate change but doing others.

“Simply put, they are lying,” he said. “And the results will be catastrophic.”

Worse than lying to us and each other is that most also continue to lie to themselves about what is happening.

Consider what John Kerry, the Biden-Harris administration’s special presidential envoy for climate, said about this part of the IPCC report. He called it “a defining moment for our planet”, are referred to “falling short” in doing what was necessary to save ourselves.

Unfortunately for us all, what he said next is precisely why our leadership is failing us.

“Importantly, the report also tells us we have the tools we need to reach our goals, cut greenhouse gas emissions in half by 2030, reach net zero by 2050, and secure a healthier, cleaner planet,” he concluded.

What we need instead of such platitudes are real plans to address what is already happening because of the climate crisis. There are ways to thrive, but it will take collective realistic drastic changes to change our trajectory.

Climate Survival Solutions, Inc., was formed to help us all navigate the harsh reality of the climate crisis and global heating. Please visit their site to learn more about what you can do to adapt for a very different future ahead.