As the western U.S. drought worsens, Governor Gavin Newsom has issued a broad-based executive order to lower water usage by as much as 20 percent. 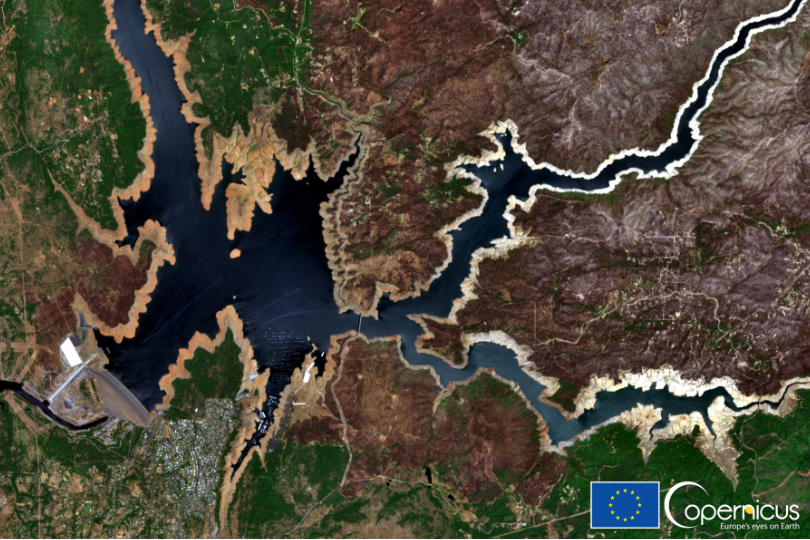 As of June 3, 2021, Lake Oroville, California's second-largest reservoir, held only 39% of its full capacity water levels, a situation visible by satellite from the presence of the bleached banks along its edges. The situation is far more serious now, over nine months later. Image provided by the Copernicus Sentinel2 Satellite. Photo: Copernicus EU, the European Union Earth Observation Programme, via Twitter

On March 24, 2022, the National Drought Mitigation Center at the University of Nebraska-Lincoln issued a report showing almost all of California as suffering from severe to extreme drought. 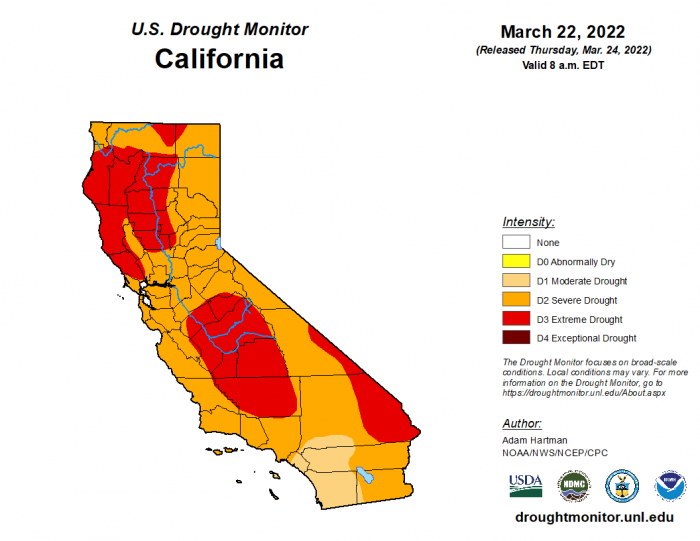 As of March 24, 2022, most of California was already in stages of severe or extreme drought. It will be far worse by summer. Photo: U.S. Drought Monitor Service

Under the labeling scheme established by the center, under severe (D2 level) conditions, there is no longer sufficient grazing land for livestock to be raised, tree and plant stress becomes evident, river flows slow down, and fire seasons increase.

Under extreme (D3) conditions, the situation grows dire quickly. Fruit trees begin to bud early, forcing early irrigation of the lands. Close to zero pastureland is available for grazing, forcing the need for expensive supplemental feed to keep yields up since livestock cannot feed off the land itself. Dairy operations shut down. Rivers heat up and their water levels drop significantly, causing problems with necessary fish migration and marine ecosystems collapse. Water reservoirs drop, something already seen throughout California as well as regionally, at Lake Mead and Lake Powell. Water aquifers for home use drop so individual users become affected. Available water supplies are insufficient for agriculture, wildlife, and urban levels. Hydropower begins to fail as an energy supply, forcing the need for power rationing. Water sanitation quality begins to degrade. Wildlife begins to encroach on developed areas, searching for food and water. The fire season shifts from just being a late summer through fall event to running for most of the year.

While this should be no surprise, as it is part of a relentless megadrought cycle which experts have demonstrated is the worst in 1200 years. It is not expected to ease up in the coming decades. The consequences for every aspect of life and commerce, in California and beyond, will be devastating.

In recognition of what is happening, Governor Newsom on March 28 issued an executive order which summarizes his office’s perspective on the drought and calls for immediate action by agencies with his span of control.

Within his order, Newsom added as background for the severity of the current problems that, “The two largest reservoirs of the Central Valley Project, which supplies water to farms and communities in the Central Valley and the Santa Clara Valley and provides critical cold-water habitat for salmon and other anadromous fish, have water storage levels that are approximately 1.1 million acre-feet below last year's low levels on this date.”

He also noted the serious groundwater shortage across the state, which is a major problem because while California usually depends on that for just 41 percent of all water use, in a “critically dry year” such as this one that usage dependency rises to 58 percent. The order also points out that 85 percent of all public water systems rely on groundwater to some extent on a regular basis, so those systems are in danger of running dry.

Under the executive order, Newsom began by asking individual Californians to conserve and to come up with their own plans to cut back, with no specific goals in mind.

He then called for the State Water Resources Control Board to “consider adopting” certain emergency regulations, including asking each urban water supplier in the state to:

“Implement, at a minimum, [water] shortage response actions adopted under section 10632 of the Water Code for a shortage level of up to twenty percent”, by a date to be set by the state Water Board.” It is expected the date will be sometime this summer.

The executive order also includes “encourage[ing] water suppliers to conserve more than required by the emergency regulations”. It calls further for the "Department of Water Resources [to] consult with leaders in the commercial, industrial, and institutional sectors to develop strategies for improving water conservation, including direct technical assistance, financial assistance, and other approaches.”

The order also suspends certain restrictions which exist presently on “the hauling of water by truck or bottle to be used for human consumption, cooking, or sanitation in communities or residences threatened with the loss of affordable safe drinking water.”

The order also asks state regulators to review whether a ban should be put in place on watering decorative grasses used in public settings and at businesses.

All this comes from the Level 2 water emergency the governor has declared. In addition to the items in the emergency declaration, at this stage it is now legal for local suppliers to restrict how often individuals can water outdoors.

If the projected need for water conservation increases to 20 percent to 30 percent of normal consumption, as is expected by sometime this summer in the state without some unexpected change in precipitation patterns, further mandatory water usage cuts would go into effect.

Jared Blumenfeld, California’s secretary for environmental protection, issued a statement urging “everything that we can do to save water now”.

The hope is that making tougher voluntary water use changes could minimize the likelihood of going to a Level 3 emergency by summer. Based on what happened last year, when the governor issued four emergency executive orders “due to the extreme and expanding drought conditions”, it is unlikely voluntary actions will be enough.

It is already expected that mandatory across-the-board cutbacks in water use will be needed in the state as early as July. If they happen, they will impact individual homeowners, businesses, and food producers in a big way. Forcing such changes so close to election season this fall could pose problems when Governor Newsom runs for reelection. But it may be precisely what the state requires, to avoid far more serious damage to the state’s agricultural industry and the ready availability of safe drinking water for everyone.

One step that the state could take is to require the recycling of all municipal wastewater in circular waste-energy-nutrient systems, like the one that will start construction this year by Climate Survival Solutions in Arizona at its Tataouine Community and Research Center.

The Tataouine Community will recycle 100% of wastewater in an advanced system that starts with a bio-digester that produces methane while further breaking-down organic material into nutrients that then feed algae to produce food, nutraceuticals, plant fertilizers and other materials. The effluent from the algae reactors will go into a pond and stream to support aquatic bio-diversity, revitalize the water and produce the nutrients to support indoor food crops. The bio-solids from the digester will be used to grow mushrooms and other fungi. The methane will be used in a generator to produce power and heat, with the CO2 from the generator going to support the algae growth.