The Lake Powell man-made water reserve is about to reach its lowest level since it was first opened fifty years ago – in 1972. When it does, mandatory water cutbacks downstream of the lake will shift from serious to severe. 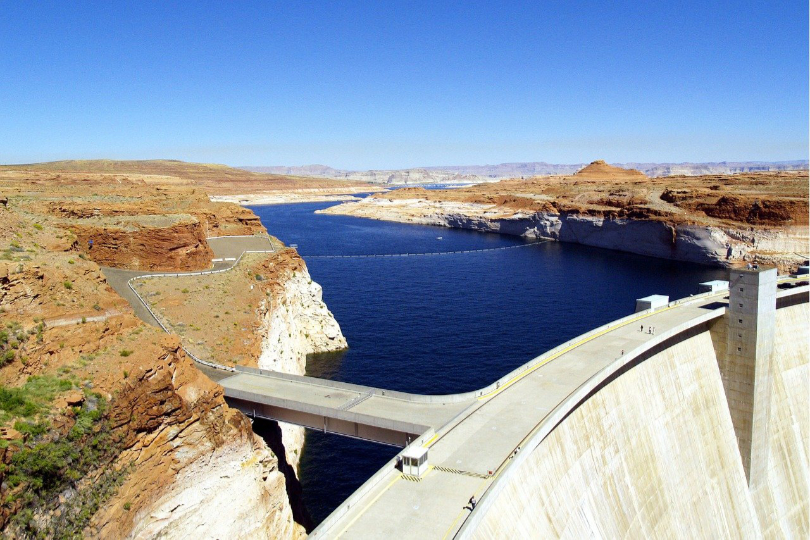 Lake Powell was built as an emergency water storage facility located along the Colorado River and overlapping across Utah and Arizona.

When full, it stores 24,322,000 acre-feet of water, water provided by what are referred to as the Upper Basin states of Colorado, Utah, Wyoming, and New Mexico. The terms under which the lake was formed requires that those states – and the lake which feeds from the Colorado River source for them – must ensure a minimum annual flow of 7,500,000 acre-feet of water to the Lower Basin states of Arizona, Nevada, and California.

The water provides drinking water and irrigation for some 40 million people in seven western states and Mexico, as provided for in the agreement in place when the lake was formed. The reservoir also provides electrical power via the Glen Canyon Dam adjacent to the lake.

It was designed to ensure water could be provided to the most arid of locations in the western U.S. At the time, the designers also identified a critical lowest acceptable elevation, after which the dam may have to be shut down to avoid malfunctioning. It is also the point at which drastic measures must be taken to curtail water flow.

That critical elevation is 3,525 feet above sea level.

Unfortunately for all those who live in that region of the U.S., the American West is in the midst of a two-decades long megadrought which was recently revealed to be the worst in the last 1200 years. Global heating due to excessive carbon dioxide emissions has not only ensured that, but also has guaranteed the megadrought cycle will continue for much of the next several decades.

That megadrought has been creating havoc and sounding alarm bells for the U.S. Bureau of Reclamation which manages Lake Powell and the other major artificial water reservoir in the country, Lake Mead.

In April 2021, just eleven months ago, the Bureau analyzed the data from the continuing drought cycle and issued a warning that it was about to declare its first official water shortage as a result of the continuing drop in water at both Lake Mead and Lake Powell.

In August 2021, the Bureau made its warning official. It declared a Tier 1 Water Shortage at Lake Mead, the first ever in the history of that lake. It also announced that as of January 1, 2022, it would be cutting 20 percent of the normal water allocation Arizona receives from the reservoir annually.

In 2022, rainfall has fallen to even more severe lows across the west and now Lake Powell, the second-largest artificial reservoir in the country, has seen its water capacity fall to levels never seen since it was filled.

As of March 3, 2022, the lake’s water level had fallen to slightly over 3,526 feet in elevation, just five feet above the danger target established by the original reservoir designers. Projections show the lake will reach that danger level sometime between March 10 and March 16.

The target does allow for the dam to continue to generate electrical power, according to Bureau experts. Unfortunately, it provides only a 35-foot buffer between the 3,525-foot level and when the dam must be shut off. When the target is reached, it will also be necessary to empty certain backup reservoirs into the lake to keep it functioning properly as a water source.

After those reserves are gone and the water at Lake Powell empties further, as current projections show, more serious decisions will have to be made.

In anticipation of the need for guidance on those decisions in advance, the Bureau of Reclamation is currently working on a revised emergency Drought Response Operations Plan. It is expected to be complete and published next month.