The climate crisis just sent a “life-threatening” reminder of its power to savage landscapes with pummeling winds and inescapable flash floods. 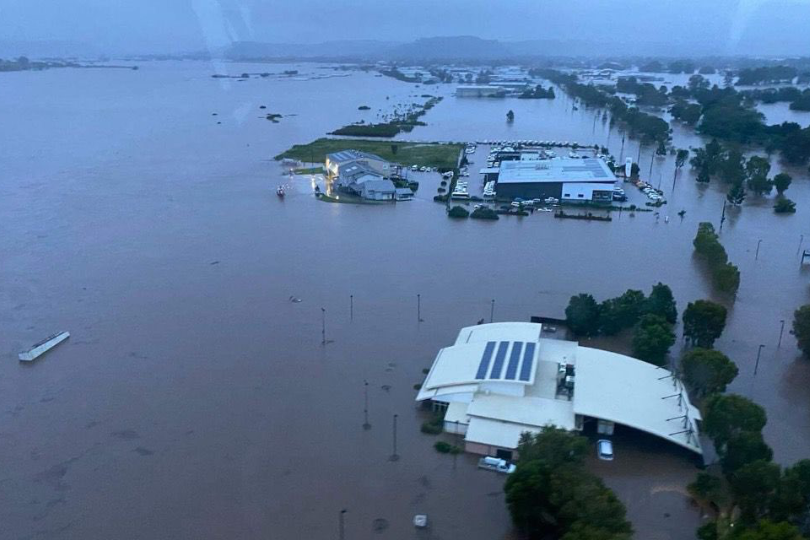 The airport in Lismore, NSW, Australia, was inundated by flooding already this week. More is on the way. Photo: Gavin Autio, via Twitter

This time it is happening in Australia, in a coastal attack which has inundated Brisbane and much of the state of New South Wales, particularly strong along the country’s southeast coast.

This is a storm which already hit Dunoon, a town north of Lismore in NSW, with a 24-hour rainfall total of 775 mm (30.5 inches) as of 9 AM on February 28. The town of Lismore itself is mostly gone, as is its important regional airport.

It is also about to spread to dump as much as 150 mm (5.9 inches) of rain in Sydney on March 2, all in one day. Rammed forward with high-speed winds, it will destroy forests, homes, and other buildings, and likely leave deaths in its wake.

It will also likely cause multiple dams to spill over and possibly collapse as the rainfall reaches its peak. Farmland will also be badly damaged, creating food shortages still to be dealt with for many months afterward, just from this single multi-day weather event.

It is another wake-up call to the power of global heating as it creates intense storm systems, driven by super-heated oceans and large-scale thermal patterns in what are often dry regions.

This storm began in the form of something becoming increasingly common throughout the world. It showed up as what local meteorologists refer to as a “rain bomb”, a hovering waterlogged cloud mass driven from the coastlines due to creation of a powerful low pressure zone off the east coast of the country.

It is similar in nature to the “atmospheric river” events which in November 2021 caused the most destructive flooding British Columbia has ever seen. Similar events followed in the Pacific Northwest states and across northern California around the same time. Those high-altitude “rivers” brought moisture over the hot Pacific Ocean from as far away as Hawaii, and in this case moved it all the way to the North American coast via a stronger-than-usual jet stream pattern.

The current weather pattern in Australia owes some of its origins to an early overheating of ocean waters off the New South Wales coast two months ago. In early January, well before the hottest months of the Australian summer, temperatures rose as much as 3° C (5.5° F) higher than normal in the coastal waters. That, combined with continued high temperatures locally and local ocean currents which were already hot, precisely created the right conditions for the “rain bomb” which blasted Brisbane already.

The Australian Bureau of Meteorology currently projects up to 150 mm of rainfall in the Sydney area today, followed by as much as 70 mm more on March 3. 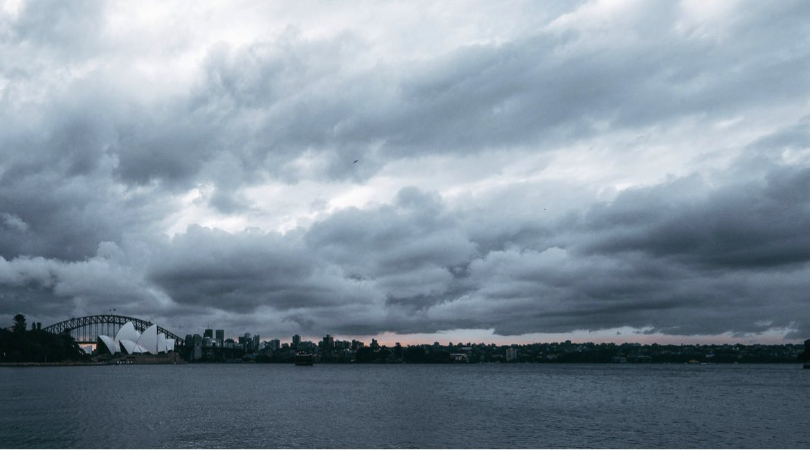 The city of Sydney, Australia, awoke on March 2, 2022, to the dark clouds of the gathering heavy rainstorms about to hit. Photo: Saketh Sudagani, via Twitter

In its official forecast for Sydney for the day, it originally projected cloudy weather, with rainfall expected to be very heavy by the end of the day. It also is forecasting “possibly severe” thunderstorms, heavy periods of rainfall, and winds gusting as high as 25 to 35 km/hour (16 to 22 mph) later in the day. The storm will also bring “large and powerful surf conditions”, and the Bureau is recommending staying away from the coasts even for swimming.

As the storm grew closer, the bureau intensified its warnings.

“Heavy rainfall which may lead to flash flooding is forecast to develop over parts of the Hunter and Metropolitan, Illawarra, South Coast and parts of Central Tablelands and Southern Tablelands Forecast Districts during Wednesday,” its updated weather warnings said. “Six-hourly rainfall totals between 80 and 120mm are likely.”

“Locally intense rainfall leading to dangerous and life-threatening flash flooding is possible with thunderstorms with six-hourly rainfall totals up to 200mm [are] possible,” the forecast continued.

It stated further than the original nominal up to 35 km/hour (22 mph) wind gusts could burst upwards of 90 km/hour (56 mph) at the coastlines.

Ships are warned to stay docked and people to stay away from the coastline during the worst of the storm. At these wind speeds, human beings cannot stand upright. Cars and trucks are also warned to stay off the coastal roadways.

Forecasts project the previous days’ storm damage in Queensland to worsen as a result, leaving mass damage and deaths in its wake.

By the end of the day on March 3, total rainfall in the region could be as high as 300 mm (11.8 inches) in the most badly affected region. Projections are now for Sydney to receive as much as 70 mm (2.8 inches) of rain just on March 3 alone.

Flooding is already being noted at multiple river sites in and around Sydney. The Bureau warned the Hawkesbury River at North Richmond may reach flood levels as high as 7.9 meters (26 feet).

The heavy rains are also projected to put strains on multiple dams and water reservoirs in the area. Warragamba Dam, Sydney’s main water reservoir, is expected to spill over starting today.

WaterNSW, the government agency monitoring the reservoirs for the state, reported that Tallowa and Cordeaux Dams, and other reservoirs in the Upper Nepean area will likely continue to overflow and spill for multiple days after the original weather event. South of Sydney, Woronora Dam is also projected to overflow.

The agency is monitoring stresses at the dams and has already begun emptying excess water in many of them, in anticipation of what is about to happen in terms of rainfall.

Because of the often very heavy rainfall and powerful gusting winds that are projected to occur today and tomorrow in NSW, the public is being advised of the high probability of flash floods occurring with little warning.