Russian Deputy Prime Minister Victoria Abramchenko announced earlier this month that Russia will be investing 5.9 billion rubles (US $75 million) to address the increasing challenge of the climate crisis. 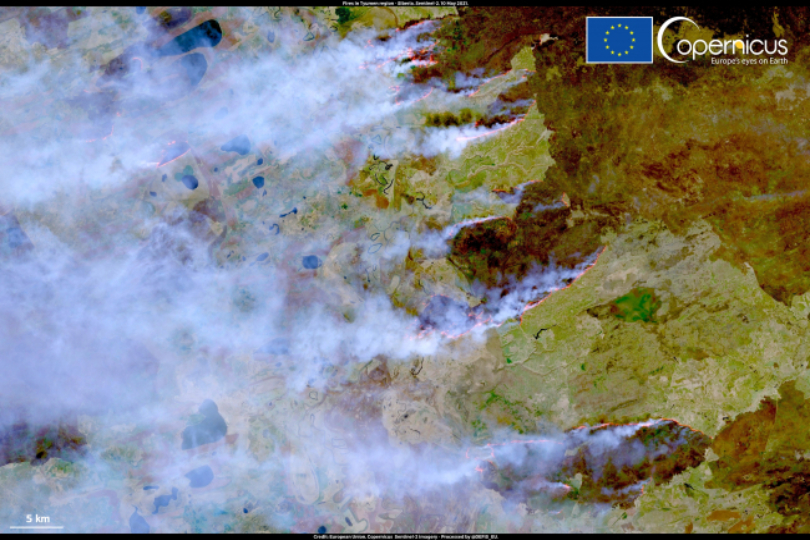 Fires in the Tyumen region of northwestern Russia, in a a satellite image captured on April 10, 2021, by one of the Copernicus climate monitoring satellites. The 2022 fire season is expected to be even worse for this region. The increasing threat to the forests by global heating is part of the focus of the new climate change innovation development efforts within Russia. Photo: Copernicus Climate Service

The announcement, which was made on February 8, is part of a broader new plan the Russian Federation has put in place to address the climate crisis.

Along with the investment of 5.9 billion rubles in innovations which may help the country adapt to and mitigate the impacts of global heating, Deputy Prime Minister Abramchenko also disclosed the government just established a Federal Scientific and Technical Program focusing on environmental development of Russia as the climate crisis heats up.

The near-term funding covers technology initiatives to go forward between now and 2030.

“The program is aimed at creating science-intensive technological solutions in the field of environmental safety, improving the state of the environment, studying the climate and mechanisms for adapting to its changes,” Abramchenko said in a formal statement about the efforts.

“The implementation of the program will give an incentive to the development of scientific and educational centers, infrastructure facilities for research and development. It will contribute to the emergence of inventions claiming international patents and science-intensive technologies with proven results in the field of environmental development,” the deputy prime minister continued.

According to the government, the program will initially focus on sources of emission of greenhouse gases, the effects of existing carbon sinks such as Russia’s vast forests, and technological innovations to lower overall emissions.

Among the initiatives will be the creation of an extensive system for monitoring what the government refers to as “black carbon,” the most damaging of emissions sent into the atmosphere. Other programs will include means of forecasting the future trajectory of the climate crisis, as well as how to enhance the carbon absorption capabilities of swamp and forest ecosystems within Russia.

The hope of the government is that by creating the climate monitoring and predictive capabilities will help improve health impacts of the climate crisis for Russian citizens – especially in urban centers – even in the next few years.

“Russia will receive its own scientific and methodological base, which will allow not only to better understand the ongoing changes in the environment and anticipate possible risks for the economy of the regions and their inhabitants, but also to effectively reduce them. In addition, the developed methods will make it possible to objectively assess the situation and pursue a balanced national policy in the context of the global fight against carbon emissions,” Abramchenko said in her concluding remarks on the matter.