Sea Levels on U.S. Coastlines to Rise One Foot by 2050

Global melting of the Arctic, Antarctica, Greenland, the Himalayan Mountain range, and more is projected to cause sea levels along the U.S. coasts to rise an average of 10 to 12 inches (0.25 to 0.30 meters) over the next thirty years. 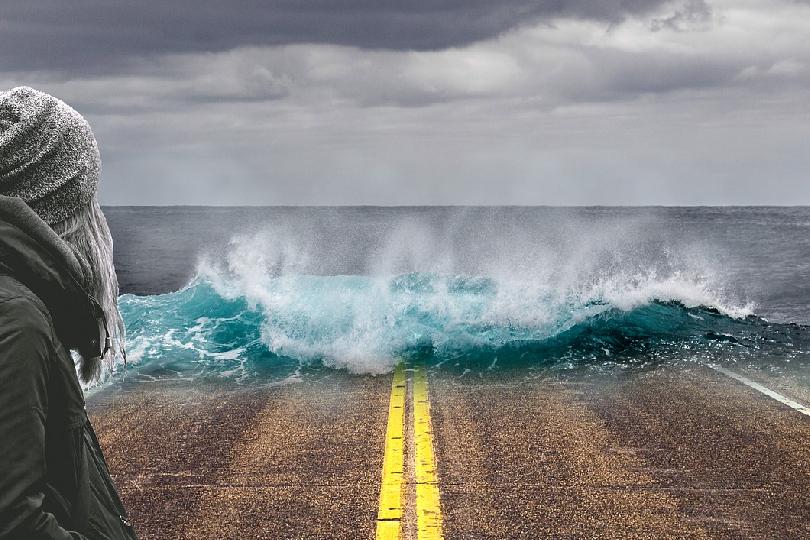 One of the early unmistakable signs of global heating is increased flooding in coastal areas as sea levels rise. The new report from NOAA projects average sea levels along America's coasts will rise by 1 foot by 2050 and 2 feet by 2100. Photo: Pixabay

And that’s if nothing far worse happens to accelerate global heating, which it is, with the melting of Arctic and release of enormous amounts of methane and CO2.

That one foot of average sea level rise will make many current coastal habitats unlivable long before the next three decades pass, forcing tens of millions of people in the United States inland and the need for mass rebuilding of multiple urban centers to accommodate the change.

The worst affected coastline will be along the Gulf Coast, where seas are expected to rise by another inches higher than the average, for a possible net rise of 18 inches. The East coast will be the second most affected with waters as much as 14 inches above current levels.

The least affected regions, along average, will be on the West Coast, which is expected to run just 6 inches net higher ocean levels by 2050. Hawaii and the Caribbean regions of the U.S. will be the second least submerged of the coasts, with projections suggesting a 10-inch sea level rise.

All these numbers are still serious, even in the best of locations.

Other conclusions from the report include that:

Statistically, what NOAA refers to as minor/disruptive high tide flooding (HTF), with surges running 22 inches – almost two feet – above current storm surges. The frequency of those events will increase during this period from just 3 events per year now to over 10 events per year by 2050.

Similarly, the moderate/typically damaging HTF events, which include storm surges about 33 inches above nominal, will increase from 3 events per year to 4. More extreme HTF events will run at about the same frequencies as currently.

The report also notes that sea levels will increase even faster if greenhouse gas emissions continue to increase without check. With expected population growth driving increased energy use without significant cutbacks in fossil fuel utilization, the melting rate of the cryosphere – the combined ice coverage along the planet – will accelerate. The report does not get concrete about precisely how bad things could become, but the implications are that the sea level rise will be higher by many inches along all coasts, if this scenario pans out.

Though not explicitly called out, the increased sea level rise and resultant flooding will have serious implications for saltwater intrusion into current freshwater systems along the coastline regions. This, combined with projected instances of far more extreme drought, especially along the West coast of the U.S., will jeopardize not just human access to freshwater sources but also an ever-more-crippling impact on agriculture in both the West and within the fruit-growing regions of Florida, just as two examples.

The researchers involved in the report also noted that ocean heating and acidification, driven by increased trapping of heat and carbon dioxide by the oceans, will also create increased problems as the seas rise.

If this were not enough to call attention to the crisis ahead, the NOAA report concluded the likelihood that average sea levels in the U.S. could increase by a net of 2 feet or more by the end of the current century. That would put much of the U.S. coastlines, from Miami to Boston in the East, from Houston to the Florida panhandle along the south, and from San Diego all the way to Seattle in the West, under water permanently.

It makes the old joke about good investments becoming available for future beachfront property in Nevada, which once related to what might happen in a massive earthquake within California, all too real.

Now consider that the 2150 date mentioned in this report is also the year by which the nations of the world claimed at last fall’s UN Climate Change conference that they would achieve “net zero” carbon emissions. That “net zero” number, which depends on wholly improbable implementation of carbon sequestering technologies and largely ridiculous assumptions about how nurturing forests might increase carbon absorption, will not happen without radical changes in the way humanity lives and the fundamental nature of a global consumption economy.

NOAA’s report makes the future painfully clear for once, at least with respect to sea level rise. This is our future and it is time to launch adaptation strategies to deal with that reality.

One company, Climate Survival Solutions, is already working on a Plan B and is developing a new climate-proof, self-sufficient and sustainable culture and civilization. It will be breaking ground in a few months on its first habitat and research center.