As proof that the climate crisis is continuing its steady march forward, a new report just announced that as of the end of 2021 Greenland ice sheet will have been melting more than it recovers from snow – for a quarter century. 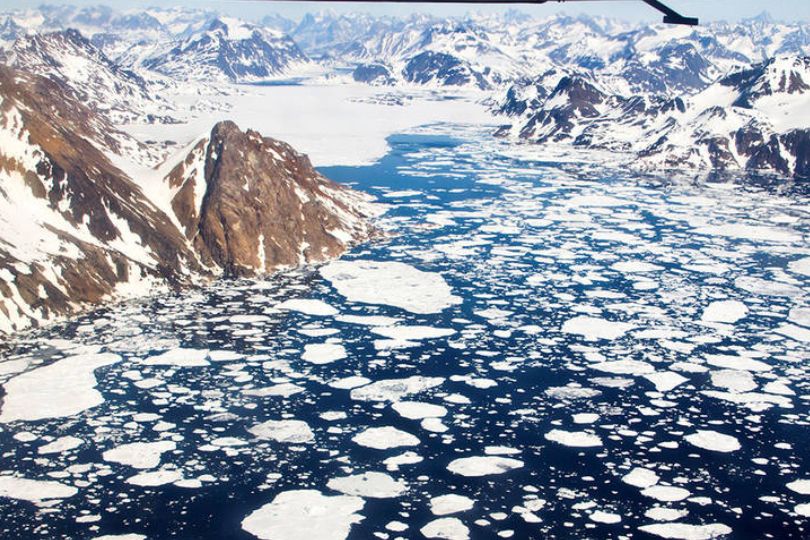 An aerial view of the icebergs near Kulusuk Island, off the southeastern coastline of Greenland, a region that is melting now 6X faster than it was 20 years ago. Photo: NASA Goddard Space Flight Center

As reported by the Arctic climate data monitoring organization Polar Portal, a Danish-run web service, the Greenland Ice Sheet, which along with the Arctic, Antarctic, and Himalayan mountain range represent the most important sources of planetary ice and glaciers, lost around 166 billion tons for the 12 months which ended in August 2021. 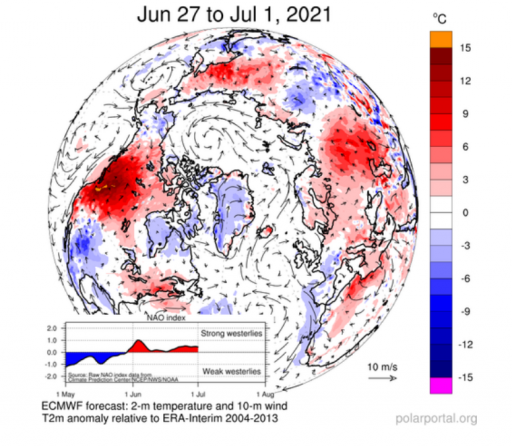 That happened despite this being an unusual beginning to the normal melting season, which starts in late spring and proceeds into June. This year during that time there were several out-of-the-ordinary heavy snowfalls for this time of year, along with colder than usual temperatures. Those effectively delayed the beginning of the melting season. At the time some scientists thought this might slow the pace enough that 2021 might even end up with a net gain of ice for the year.

While only a delay in the inevitable, that would have been good news.

That was quickly compensated for by a major and equally uncharacteristically strong heatwave for the region in late July. During that heatwave, temperatures at the East Greenlandic airport town of Nerlerlt reached a record new high temperature of 23.4° C (74.1° F). 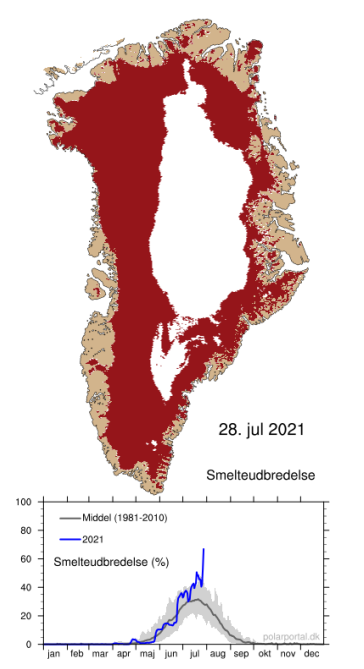 Map of Greenland ice melting in July 2021. The top map shows the rapid area of ice melt on July 28. The graph shows how unusual the single-day melt was on that day. Photo: Polar Portal

As shown in the map of Greenland in the top part of the figure above, glacial and ice melting was occurring in a much larger than normal area (the red part of the map) when the heat wave peaked on July 28. The graphic below shows the relative ice melt recorded in Greenland during this time. One can see the major ice melting spike increase on that date, when the heat contributed to a loss of 60 percent of the surface of the Ice Sheet in that single 24-hour period.

In addition to the early cold weather and snowfall through June, and the shock heatwave in late July, there were two other unusual climate events in the country this year. One happened in the form of a record rainfall in Qaqortoq, located in Southern Greenland, at the time of the summer solstice. 145 mm (5.7 inches) fell that day. Major floods were recorded that day even as far north as Qaanaaq, resulting from the same weather pattern.

A second unusual event with perhaps even more far-reaching implications for the ice in Greenland. That happened when in August there was, as the report notes, “precipitation at Summit Station, which is located at the 'top' of the ice sheet at an altitude of 3,200 meters above sea level, was registered in the form of rain."

The late spring low temperatures and snowfall did, as tallies were made by the end of the year, contribute to what the scientist noted was the 28th lowest total ice melt in the 41 years the records have been tracked in the region. Despite that low record, the net loss of 166 billion tons of ice was considerably higher than the lowest ever net loss in 2012, when then logged in at just 38 billion tons loss.

The net melting of Greenland’s glacial ice and snow, for the year ending August 2021, was calculated to have contributed 1.5 centimeters (0.6 inches) out of a net total sea level rise on the planet last year, from all global melting, of 12 centimeters (4.7 inches).

The message the planet is trying to send us with this data is just a simple truth, that we are heading for a time soon when all of Greenland’s ice will be gone. With Arctic Sea Ice likely to disappear permanently during most summers soon, major parts of the Antarctic ice sheets about to calve and separate, and the Himalayan mountain range continuing to melt at two to three times the rate it did two decades ago, Greenland’s ice continuing to disappear spells very bad news for overall sea level rise.

The exposure of Greenland to the sun without snow will also contribute to even more intense heating of the newly-uncovered land areas.

The “Polar Portal Season Report 2021” is available for download here.