A combination of factors is driving temperatures off the New South Wales coast to 3° C (5.5° F) higher than normal even before the hottest months of the year approach. 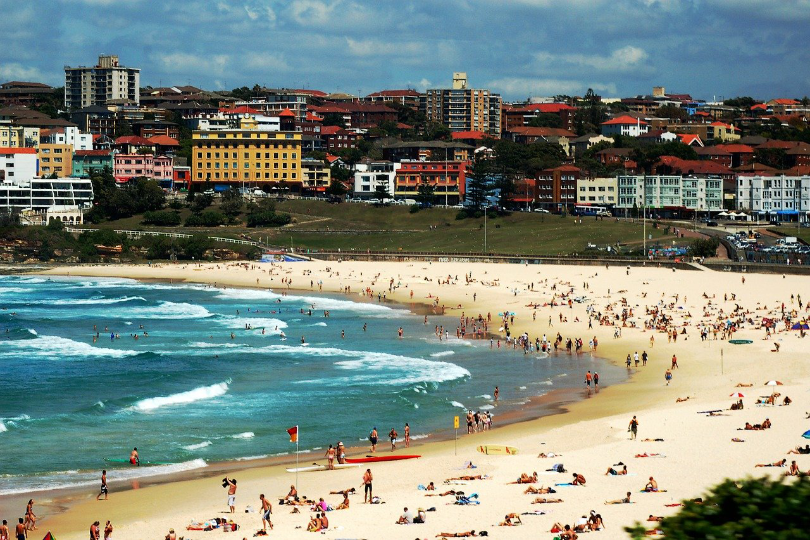 Bondi Beach in Sydney, Australia. Beach goers here and further north at the Great Barrier Reef area were among the first to experience the unusually warm higher ocean temperatures of the East Australian current this year. Photo: Image by Flo K from Pixabay

The extreme temperatures point to the beginning of what could be the beginning of an especially dangerous mid-summer ahead for Australia, nearby marine life, and continued assaults on the integrity of the Antarctic ice flows further south.

While surfers and swimmers off the coast of Sydney were the first to notice the sharp changes in the warmth of the ocean, satellites quickly confirmed the news. As multiple reports soon confirmed, the temperatures reported were what might have been expected by mid-to-late February, when the full heat of the summer would be felt.

According to oceanographer Professor Moninya Roughan at the University of New South Wales, an expert on this marine region, the temperature increases were already on their way just from general ocean warming because of the climate crisis. The ocean heat was amplified thanks to the presence of the current La Niña weather environment and unusual atmospheric situations which played a factor.

“It appears now to be reaching those record levels and will likely be the hottest January on record,” she said in an interview with reporters. “It’s an extreme marine heatwave.”

Atmospheric conditions (left) are helping transform the marine heat map off the coast of Sydney, Australia. Atmospheric pressure data as of 4 January 2022, and Ocean Current map as of 31 December 2021. Reproduced under a Creative Commons Attribution International 4.0 License, courtesy of: Integrated Marine Observing System, at https://oceancurren.imos.org.au.

Per her analysis, the hotter-than-usual waters off the New South Wales coast are currently circulating within the East Australian Current. That is a large water system which flows southernly starting at the Great Barrier Reef off the state of Queensland, and then flows down across Sydney. The East Australian Current is about 100 kilometers (62 miles) in width.

Roughan believes there will be a sizable eddy which will break off from the Sydney coast not long from now. When that happens, the unseasonably hot ocean waters will propagate further southwards beyond Sydney.

In a paper published in Geophysical Letters in December 2020 which she co-authored with Neil Malan and Collette Kerry, Roughan and her colleagues had already determined that the temperature rises in the region represented a disproportionate response to global heating and the climate crisis, but one that the region would see far more of in the future.

“Shelf waters poleward of more than twice as fast as those equatorward of 32°S,” the authors wrote at the time. “We show that nonuniform shelf temperature trends are driven by an increase in lateral heat advection poleward of the WBC separation, along Australia's most populous coastline.”

Besides the marine heatwaves causing a “seeding” that could enable stronger-than-usual extreme weather to come across Australia’s east and southern coasts, the warm waters will have major impacts on marine life in the region.

Among those impacts will be increasing waves of bull, tiger, and great white sharks to the coast, each of which are not commonly seen there this time of year.

It is also expected that seals and colder water sea life will have trouble surviving these marine heatwaves.

As the East Australian current continues to develop, there are implications inland as the increased heat overall could produce drier conditions on the lands, setting the stage for possible late summer wildfires.

The hotter waters could also set the stage for May-through-August period later this year, in which the ocean currents could disturb the normal movement of the seasonal water and atmospheric currents leading down to Antarctica. That in turn could accelerate the already high-melting rates of some of the bigger ice fields along the ocean’s surface at the pole.