Rolls-Royce’s Power Systems Division will soon begin construction on two major hydrogen-powered electrical supply facilities at the Port of Duisburg, Germany. It represents one of the biggest transitions of an entire port solutions ecosystem away from fossil fuels in history. 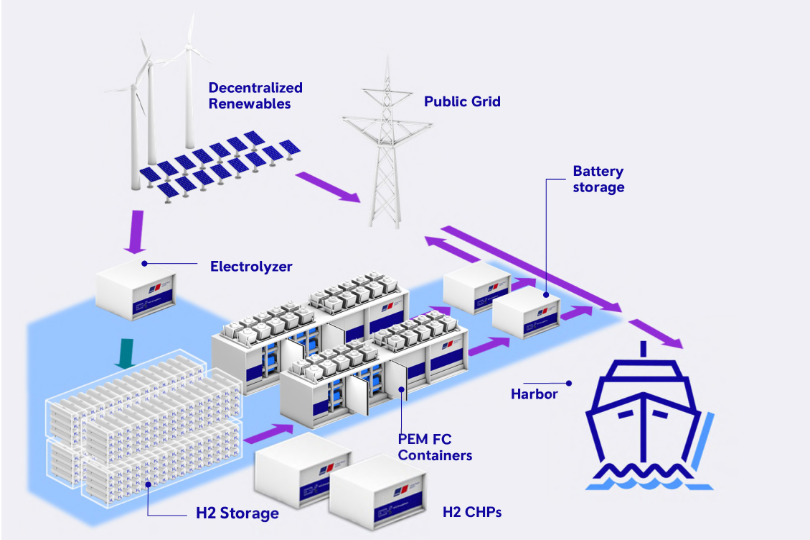 Hydrogen as an energy solution for inland ports: A microgrid based on renewable energies with hydrogen-powered fuel cells for emergency and peak power as well as hydrogen combustion engines (here a principle illustration) will meet the special energy requirements of port facilities. A similar solution is being created in the near future for the Port of Duisburg\'s new container terminal with mtu hydrogen technology from Rolls-Royce. Photo: Rolls Royce Holdings plc

One is a hydrogen fuel cell system to supply peak load electrical power for the port. It will manage conditions such as when many vessels are simultaneously at berth locations at the port while still fully operational and drawing power from the port, rather than from internal systems. This will utilize the Rolls-Royce mtu fuel cell system.

The second is a separate hydrogen-powered combined heat and power-generation station. This will incorporate two hydrogen-powered internal combustion engine-generator sets, based on the architecture of Rolls Royce’s natural gas-fired Series 4000 powerplants. Excess heat provided by exhaust from the generators will be used both to supply heat and for other power generation needs.

The final system installation at the Port of Duisburg will also include solar panels and associated battery storage capabilities.

Ther port terminal project affiliated with this is a partnership between inland barge HTS Group, intermodal transport group Hupac SA of Switzerland, and Cosco Inland Shipping.  It is being constructed as part of a master plan for the “New Silk Road” project to connect the European Union more efficiently with cities in central and eastern China.

When the terminal is complete, it could increase the number of unit trains connected to the port by to as high as 1000 trains per week.

A further intention of the project is to reduce the relatively low efficiency and higher carbon footprint part of container traffic, via truck, to less than 20 percent of total traffic out of the port. When complete, around 40 percent of the traffic leaving the Port of Duisburg will be by rail and the remaining 40 percent will be by inland barge.

Though not yet signed off as part of the Port capabilities expansion, the management expect to add hydrogen-powered trains as part of the rail carrier solution for container shipping.

Along with all these features, the Port of Duisburg plans to build an associated full supply chain network for both hydrogen fuel and the fuel cells needed by the port. This will enable future rapid growth of the use of hydrogen throughout the region.

That this port, which has 30 million consumers located within just 150 kilometers (93 miles) is making such a radical shift represents further proof that hydrogen technology is ready to support even the most mission-critical of supply chain logistics systems infrastructure and the power of the fossil fuel industry to thwart such projects, as it had done for the past 30 years, it waning.

Rolls-Royce said the inclusion of the hydrogen technology will effectively make all power systems for the Duisburg port "carbon neutral."

Partners in the project include the German federal government, scientists at the Fraunhofer Institute Umsicht, regional utility groups, and the local government of Duisburg,

The project is also receiving support from the Ministry for Economic Affairs and Energy for the next four years.