The Arctic Ocean Has Been Heating Up Since 1900

Researchers have discovered the Arctic Ocean began heating due to greenhouse gas emissions many decades earlier than previously realized. The findings suggest current models may grossly underestimate how fast the climate crisis could kill the planet. 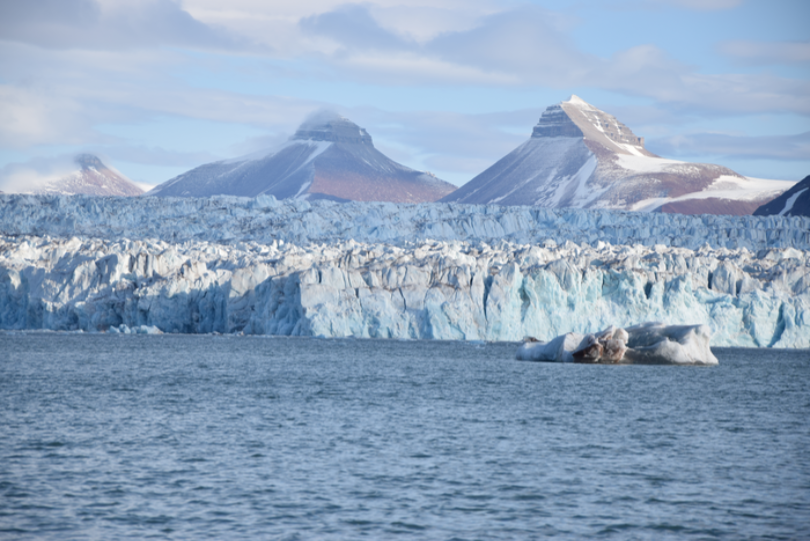 A view of the Fram Strait, between Greenland and Svalbard, facing the Svalbard side. This ocean waterway in the Arctic was the focus of researchers\' studies which showed the Arctic Ocean has been warming for far longer than any previous study had indicated. Photo: Sara Giansiracusa, for University of Cambridge

There is no disagreement how serious ocean warming in the Arctic is for the planet.

As more solar energy is trapped close to the planet by increasing concentrations of greenhouse gases such as carbon dioxide and methane, the Arctic is notable for suffering from the increased temperatures in the region. The ocean waters warm, the sea ice melts, then the lack of sea ice decreases the albedo – a measure of the amount of solar energy reflected from the region. As the albedo drops, more energy is absorbed, and the cycle accelerates.

It is why scientists predict 2022 could be the year Arctic Sea Ice in many regions disappears forever from the planet. It is also why the living ecosystems of the Arctic, including the once common polar bear and many species of marine life, are rapidly heading towards extinction. This is also behind the melting of permafrost, ferocious wildfires, and recently understood serious coastal erosion in northern Siberia.

The same Arctic heating is also the cause of a heat bubble in the Arctic which disrupted the global jet stream last January. That in turn produced the Polar Vortex which blasted southwards through the North American continent and left much of Texas with frozen pipes in February 2021.

It is the same Arctic heating which could quickly unleash stores of frozen methane hydrate under the ocean and in reserves trapped up until now within Siberian permafrost. When that rises into the atmosphere it will cause even more rapid trapping of solar radiation.

Thanks to the work of international team of researchers from the University of Cambridge’s Department of Geography and the Institute of Polar Sciences of the National Research Council in Bologna, there is now a far deeper understanding of precisely how long ago the Arctic began to warm.

That information is throwing into question much of the world’s major climate change models.

What had been believed up until this study is that Arctic warming was caused principally by direct regional heating because of trapped heat close to the Earth’s surface. What the study has revealed is instead that the Arctic began superheating far earlier than the rest of the planet, with the cause being the same trapping of greenhouse gases but triggered initially by warmer water coming to the polar ecosystem from the Atlantic Ocean. It is a process called Atlantification.

All that began to happen not at roughly the mid-20th century, as most models had demonstrated. The new research says this began decades earlier, at the beginning of the last century.

It also appears to have happened only a few decades after the industrial revolution began polluting the planet with the black smoke of coal and wood-fired furnaces.

This all adds up to a conclusion that many of the most important climate models being wrong, by underestimating the impact of even smaller amounts of carbon dioxide in the atmosphere. It could mean the planetary cliff of climate-driven extinction our collective biological ecosystems are racing towards is far closer than anything imagined before.

The study, headed up by the University of Cambridge’s Dr. Francesco Muschitielio and the Institute of Polar Sciences’s Dr. Tesi Tommaso, focused on when and why the Arctic had transformed from its 19th century state of deep freeze to its current one.

They did so by selecting a region of interest, the Fram Strait, a waterway referred to often as the gateway to the Arctic. It is a channel positioned between Greenland and Svalbard, a Norwegian archipelago north of mainland Europe.

The researchers investigated what happened by studying the chemical signatures present in marine microorganisms. By doing so, and by looking at long-term data, they found that prior to 1900, Arctic temperatures and salinity had been relatively stable. Other data says at that time the sea ice was relatively stable in coverage, except for the seasonal melting in the summers and refreezing in the winter.

The scientists determined all that changed soon after the 20th century began. Their data showed the heating of the Arctic Ocean, the shallowest of all the world’s oceans, began its steady climb around 1900, with average temperatures rising at least 2° C (just under 4° F) during the last century.

The reason for the heating was another surprise. By tracing the marine life chemical signature geographical patterns, the researchers realized it was the warmer and saltier waters coming from the Atlantic Ocean were transforming the once isolated waters of the Arctic during the last century. That points to yet another conclusion, that the world’s oceans, which have only been able to be mapped for temperature during the last few decades, also began to heat up a lot earlier than previously known. 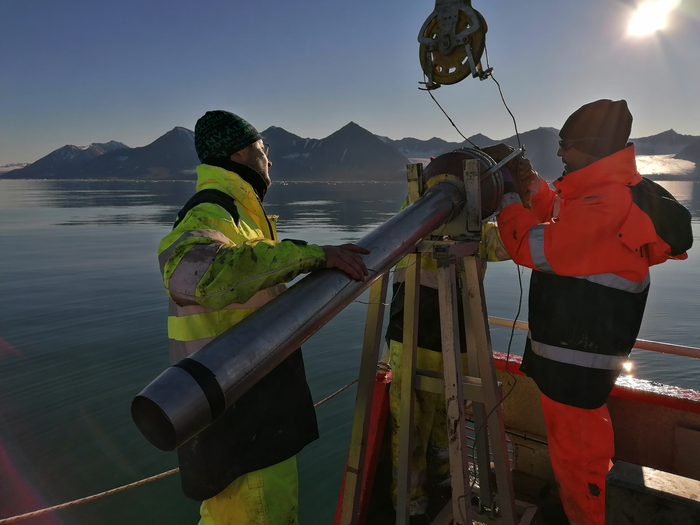 Researchers taking marine samples in the Fram Strait for the study of ocean warming in the Arctic. Photo: Sara Giansiracusa, for the University of Cambridge

“We reconstruct[ed] the history of Atlantification along the eastern Fram Strait during the past 800 years using precisely dated paleoceanographic records," the authors wrote in their paper reviewing their discoveries. "Our results show rapid changes in water mass properties that commenced in the early 20th century—several decades before the documented Atlantification by instrumental records."

The implications of this research on possibly far more rapid melting and calving of ice sheets in Greenland are extremely serious.

“We compared our results with the ocean circulation at lower latitudes and found there is a strong correlation with the slowdown of dense water formation in the Labrador Sea,” said co-lead author Dr. Francesco Muschetielio. “In a future warming scenario, the deep circulation in this subpolar region is expected to further decrease because of the thawing of the Greenland ice sheet. Our results imply that we might expect further Arctic Atlantification in the future because of climate change.”

“The Arctic Ocean has been warming up for much longer than we previously thought,” Muschitielio said in comments to reporters about the study. “And this is something that's a bit unsettling for many reasons, especially because the climate models that we use to cast projections of future climate change do not really simulate these type of changes."

"We're talking about the early 1900s, and by then we've already been supercharging the atmosphere with carbon dioxide," he continued. "It is possible that the Arctic Ocean is more sensitive to greenhouse gases than previously thought. This will require more research, of course, because we don't have a solid grip on the actual mechanisms behind this early Atlantification."

To put these conclusions in current context, Arctic sea ice reached its second lowest-level in history this last September. A study released the same month delivered the additional bad news that coverage of what is referred to as the Arctic’s Last Ice Area, a part of the ocean just north of Canada, is retreating at a rate which concluded there will be zero ice there by the end of this century.

Based on the new information regarding when the Arctic Ocean began warming, scientists are now predicting the entire Arctic will likely lose the rest of its ice far sooner, mainly because the new study says the Arctic --- and all other oceans – are far more sensitive to greenhouse gas concentrations than past models had predicted.

Because of that, long before the last of that ice is gone the planet will have begun to ripple through multiple mass extinctions. The warming of the oceans and permafrost could also cause rapid releases of methane, changing the amount of solar energy trapped by the atmosphere and accelerating both ocean acidification and toxicity of the air we breathe.

“Rapid Atlantification along the Fram Strait at the Beginning of the 20th Century,” by Tesi Tommaso, Francesco Muschitelio, et. al, was published on November 24, 2021, in the peer-reviewed journal Science Advances.