Hurricane Sandy was a slow-moving megastorm which caused extensive damage to the east coast of the United States, with powerful winds that lingered longer than most storms. Scientists predict that will be the new normal by the end of the century. 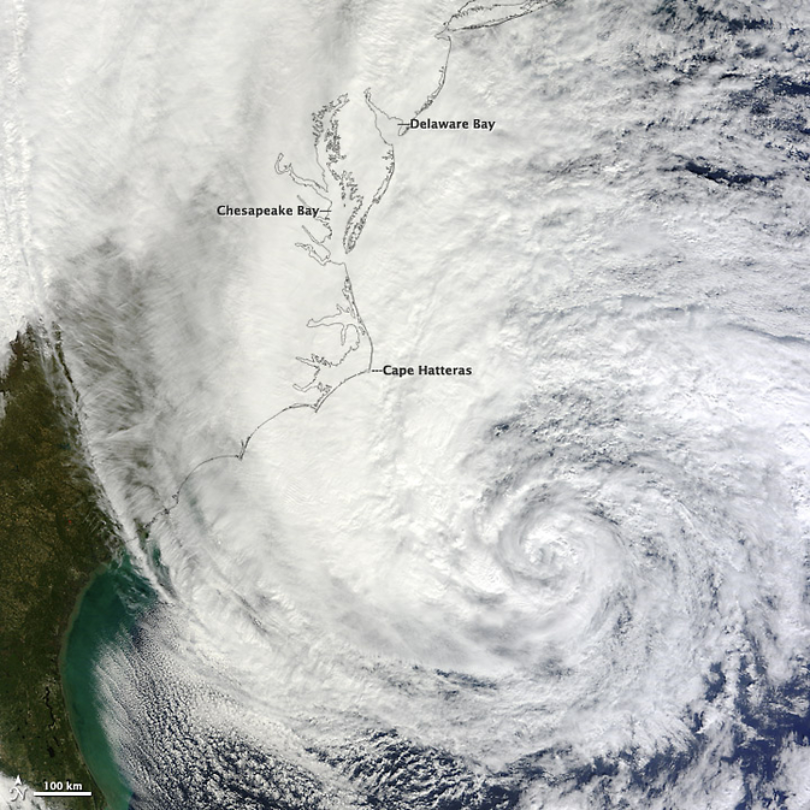 In the new study, climate scientist Andra Garner at Rowan University analyzed more than 35,000 computer-simulated storms. To assess likely storm outcomes in the future, Garner and her collaborators compared where storms formed, how fast they moved and where they ended from the pre-industrial period through the end of the 21st century.

The researchers found that future East Coast hurricanes will likely cause greater damage than storms of the past. The research predicted that a greater number of future hurricanes will form near the East Coast, and those storms will reach the Northeast corridor more quickly. The simulated storms slow to a crawl as they approach the East Coast, allowing them to produce more wind, rain, floods, and related damage in the Northeast region. The longest-lived tropical storms are predicted to be twice as long as storms today.

The storm track of Hurricane Sandy from 2012 could become the template for many storms every year by the year 2100. (Source:; NASA Animation)

The study was published in Earth’s Future, which publishes interdisciplinary research on the past, present and future of our planet and its inhabitants.

The changes in storm speed will be driven by changes in atmospheric patterns over the Atlantic, prompted by warmer air temperatures. While Garner and her colleagues note that more research remains to be done to fully understand the relationship between a warming climate and changing storm tracks, they noted that potential northward shifts in the region where Northern and Southern Hemisphere trade winds meet or slowing environmental wind speeds could be to blame.

“When you think of a hurricane moving along the East Coast, there are larger scale wind patterns that generally help push them back out to sea,” Garner said. “We see those winds slowing down over time.” Without those winds, the hurricanes can overstay their welcome on the coast.

Garner, whose previous work focused on the devastating East Coast effects of storms like Hurricane Sandy, particularly in the Mid-Atlantic, said the concern raised by the new study is that more storms capable of producing damage levels similar to Sandy are likely.

And the longer storms linger, the worse they can be, she said.

“Think of Hurricane Harvey in 2017 sitting over Texas, and Hurricane Dorian in 2019 over the Bahamas,” she said. “That prolonged exposure can worsen the impacts.”

From 2010 to 2020, U.S. coastlines were hit by 19 tropical cyclones that qualified as billion-dollar disasters, generating approximately $480 billion in damages, adjusted for inflation. If storms sit over coasts for longer stretches, that economic damage is likely to increase as well. For the authors, that provides clear economic motivation to stem rising greenhouse gas emissions.

“The work produced yet more evidence of a dire need to cut emissions of greenhouse gases now to stop the climate warming,” Garner said.

Co-author Benjamin Horton, who specializes in sea-level rise and leads the Earth Observatory of Singapore at Nanyang Technological University, said, “This study suggests that climate change will play a long-term role in increasing the strength of storms along the east coast of the United States and elsewhere. Planning for how to mitigate the impact of major storms must take this into account.”