Arctic Coastline in Russia Eroding Fast Due to Climate Crisis

A scientific team at Moscow State University revealed that global heating effects in the Russian Arctic are causing losses of 1 to 3 meters (approximately 3 to 10 feet) every year. Thanks to the toxic waste embedded in the eroding coastline, the danger to the entire planet is potentially catastrophic. 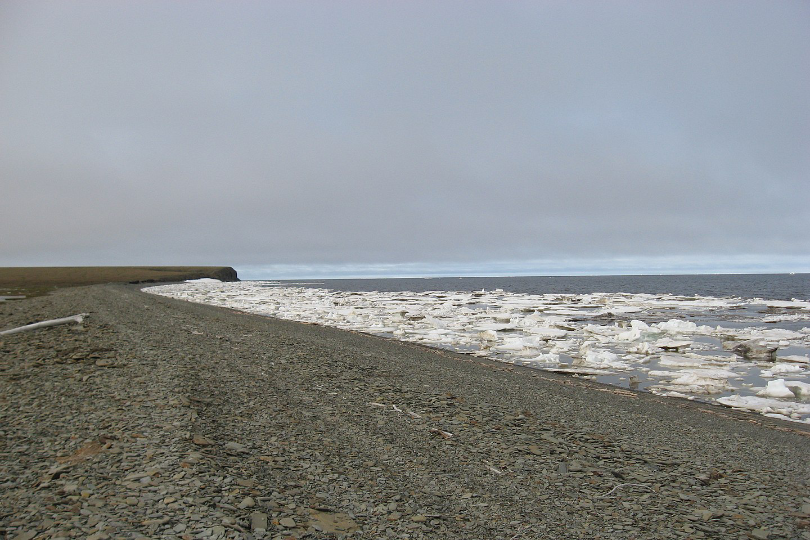 Anabar Bay, located just south of the Laptev Sea in the Arctic, on the Russian Siberian coast. Regions like this are eroding at rates as high as 7 meters (23 feet) per year, thanks to thermal abrasion and the climate crisis. Photo: Vladdislav, CC

Even without the climate crisis, a phenomenon known as thermal abrasion brings together the briny waters of Arctic Ocean with thermal energy impacts to cause erosion of the waterfront faster than in other regions.

Thanks to the climate crisis and global heating, the natural processes of thermal abrasion have been accelerating in recent years along the northern coast of Russia.

According to Stanislav Ogorodov, Moscow State University’s (MGU) head geo-ecological scientist, he and his team have discovered those natural processes are degrading the northern coastline at a rate previously unheard of. So much so that every year a block of Siberian shoreline equal in area to central Moscow is being ripped from the edges and merged into the ocean waters.

The MGU conclusions were based on a detailed analysis of thermal abrasion along the southern edges of six different seas: the Barents, Pechora, Kara, Laptev, East Siberian, and into the Bering, near Alaska. They included evaluation of archival information, data from other studies, and information from the university’s own measurements.

That analysis has allowed the research scientists to put together a detailed database covering the history of history of change of the northern Russian coastline going back a full century in time.

“Such a database allows us to …compare the rate of coastal destruction with various features of the natural environment,” said Daria Bogatova, Candidate of Geological and Mineralogical Sciences, Researcher at the Laboratory of Geoecology of the North of the Faculty of Geography of Moscow State University.

Among the features Bogatova and other scientists involved in the project were able to evaluate were the implications of different rock composition long the coastal edges, shapes of the coastline structures, varying temperatures in the region, and the intensity and frequency of storms in the area.

What the researchers were able to determine was that thermal abrasion at the edge of the Arctic is running between 1 to 3 meters per year on average. In some areas it is already far faster than that, with numbers as high as 5 to 7 meters (16 to 23 feet) per year. In areas currently covered by ice for much of the year, such as in eastern Siberia’s Sakha region, the rate of thermal abrasion is even faster – up to 10 meters (33 feet) per year.

While the pure mechanics of the abrasion alone are significant for land erosion and normal ecosystem destruction alone, for Russia there are other variables at stake that could make the situation far worse.

Since this area has been a major oil and gas producing area going back to the Soviet era dating back to the mid-20th century, there are major deposits of fossil fuels and chemicals used to facilitate the drilling which are in danger of being released into the environment as the Arctic “beachfront” erosion continues. The damage from that alone could be devastating to the delicate Arctic marine environment as well as the coastal habitats may other forms of life, from amphibians which come ashore to mammals coming into the sea to hunt, and Arctic birds.

The released chemicals will also exacerbate release of carbon dioxide, methane, and other fossil fuel emissions into the atmosphere at high rates.

The Russian scientists also point out that even without the thermal abrasion problem, the climate crisis induced melting of the permafrost which currently covers some two-thirds of all Russian landmasses is also already creating havoc. These are already releasing trapped carbon dioxide and methane into the ecosystems nearby and the atmosphere.

Russia has estimated the damage to the permafrost will cost the national economy some $67 billion per year by 2050.

Unfortunately for the planet, the damage from the release of trapped chemicals and fossil fuels into the Arctic is already happening and will likely be close to impossible to bring to a halt. For the permafrost, short of finding some way to seal it all back in, that too is something the planet is already stuck with.

Both the effects of the thermal abrasion on the edges of the Arctic Ocean and the melting of the permafrost are examples of effects of the climate crisis which will continue to damage the atmosphere and regional ecosystems, even if all fossil fuel emissions were brought to zero immediately. This is yet another reason that plans to save the planet need to shift from attempting to slow global heating to finding ways to survive what is already going to happen.