After record-setting rainfall, flooding, and landslides, the latest climate crisis related extreme weather event to hit the region has forced British Columbia Premier John Horgan to declare a state of emergency to deal with the deluge. 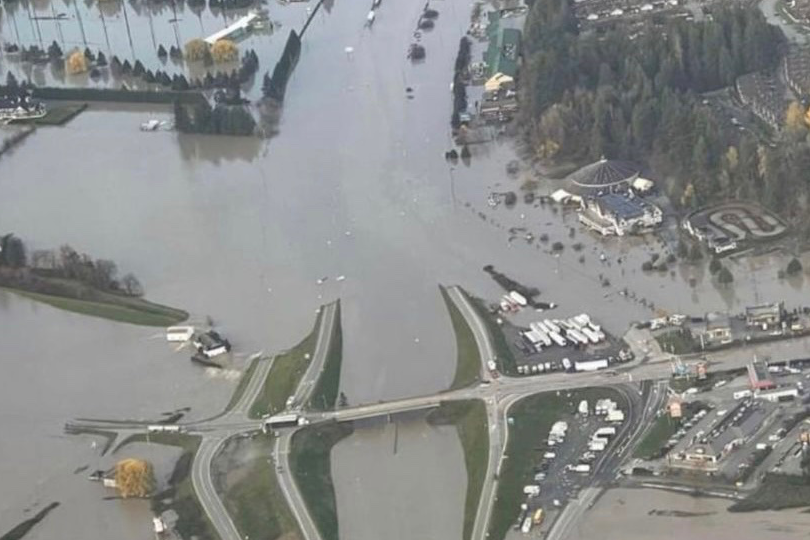 All major highways in British Columbia were cut under water from the severe rainfall this past week. Photo: Hanna, via Twitter

The weather pattern known as an “atmospheric river” that triggered what just happened in British Columbia originated thousands of miles away in Hawaii.

The high-altitude airflow was 2,600 miles long and loaded with water vapor. Such patterns are becoming far more common thanks to global heating of the oceans and supersaturated cloud patterns which form overhead. When those cloud structures begin moving thanks to multiple jet stream patterns above the planet, they can move astounding quantities of water across thousands of miles until they reach land masses. Then they drop their water vapor “payloads” on the earth below quickly, and to devastating effect.

These same atmospheric rivers have already struck the North American west coast multiple times since October. They created wave after wave of flooding and landslides. But what hit British Columbia and northern Washington State running from November14 and 15 and to the present were pegged at a level of 5 out of 5 on the atmospheric river scale.

The Atmospheric River scale is a way of rating comparative events like this based on intensity of storms and how long they last. Photo: The Center for Western Weather and Water Extremes

That scale, which was created to classify atmospheric river events, rates the severity of this kind of extreme weather on a scale of 1 to 5, similar to the way tropical storms, cyclones, and hurricanes are now tracked. That severity is evaluated based the duration and the intensity of the events, where intensity is measured in what is called IVT, where the units are in kilograms of water delivered by the storm per meter per second.

Rainfall in the region shocked everyone with how fast so much water inundated the region. Just 95 miles east of Vancouver, the town of Hope, British Columbia, was hit with 11.58 inches of rain in a 24 hour period when the aerial river passed through. Others received far less, such as the city of Abbotsford, located 40 miles southeast of Vancouver, with 3.95 inches coming in on November 15. The smaller amount shows the precision formation power of this atmospheric river, and yet the amount of rain collected at Abbotsford still set a local record, with twice the amount it received as a record the same day in 1998.

With such precision “water vapor bombing,” the entire region exploded in flooding throughout, wiping out roadways, destroying agricultural land, drowning livestock, filling up inside homes and other buildings, and creating landslides which could take months to fix.

In Abbotsford, Mayor Henry Braun and other officials worried that the local pumping station would fail from the pressures of the storm. Somehow it held together, but still 184 people who were trapped by the rising waters were eventually rescued by helicopter, small boats, and even emergency crews on Jet-Skis.

In the farmlands, the Mayor described the impact on livestock as catastrophic.

“I think I saw a few cows that seemed to be floating in the water yesterday from the helicopter,” he told reporters. “But we have no numbers. There’s a lot of birds out there, too, poultry – I saw barns that looked like half-full of water. I can’t imagine that there’s any birds left.”

Mudslides from the storm also knocked out a portion of Highway 99 near Lillooet, located 150 miles northeast of Vancouver. There the region was hit with a record-setting two inches of rain from November 15 through 16. The floods moved so quickly that at least one person was killed there. With others still reported missing, the death count may continue to rise.

According to British Columbia provincial officials, this storm forced the evacuation of over 17,500 people from the region just from flooding alone. Information is still coming in on people who were and are trapped within their dwelling, and have not yet found shelter.

Further south, the southern extent of this atmospheric river assault caused four rivers in western Washington state to flood to levels never seen before. Some areas saw as much as 40 inches of rain coming in over the 30-day period which ended this week.

The worst floods hit in Whatcom County, Washington. Water levels there were so high that they were pouring in through first floor windows of some homes and other buildings. In Sumas, located just south of the British Columbia border, local officials estimated that 75 percent of that city had been hit with at least some water damage.

Some 45 miles further south of Vancouver, in Bellingham, Washington, the extreme weather caused floodwaters to much of the region as well. With 5.57 inches of rain recorded in the city just between November 13-15, an amount bigger than the city’s normal monthly November rainfall, mudslides flowed quickly, forcing the major north-south roadway Interstate 5 to close.

Other rainfall from storm caused major flood damage in the counties of Skagit and Callam, Washington.

As British Columbia Premier John Horgan announced the state of emergency for the province on November 17, he pleaded with citizens not to enter the most devastated areas, so as to leave room for others to help rescue people and restore services. Recognizing the fear people might have, he also called for people to keep from hoarding goods in stores, as supply chains for even the most basic of items have been cut by the floods.

Horgan was somber in his reflections on what this storm means both now and for the future of British Columbia.

“These are extraordinary events not measured before, not contemplated before,” he told reporters. “We all know that we live in a rainforest. We get wet in November, but nothing – nothing – remotely resembling this.”

The impact will be extensive and recovery will take months, if not years. The shut down of the port and roadways and railways leading from it will impact all of Canada. Wheat will not be shipped out and the many products shipped into the port will make shortages across Canada much worse and further impact the supply chain.

Rail lines between Kamloops and Vancouver remain closed as crews and engineering teams continue to clear debris and conduct repairs at multiple locations. A timeline for the resumption of rail operations to the west coast is unavailable.